Lighting Up London With Heal’s

You might think the prospect of a walking tour around Central London on a cold January evening might not be the most exciting, but we were thrilled to be invited by Heal’s to take a stroll and take in the stories of gas-lit London. Meeting up in Somerset House, our excellent guide Peter from Discovering London took us along The Strand, through some dark alleys and all the way back to the mothership, a.k.a. Heal’s flagship showroom on Tottenham Court Road.

From a starting point on the North Bank of the river, we took our first pit-stop into The Savoy. After we stopped looking over our shoulders thinking someone would ask us to leave, Peter spoke about how The Savoy theatre was the first in London to be completely electrified, but we were more taken by the fantastic architecture in the area. Fun fact: if you’re ever lucky enough to stay at The Savoy, don’t take your luggage into the foyer – this is extremely bad manners. Instead, be pleasantly surprised when it arrives in your room before you do! Check out the fantastic glass fountain by Lalique – the only one in the world.

Next up was the home of the Charing Cross Electrical Supply company. Hidden up a lane just off The Strand is the Powerhouse. It was established in 1888 to provide lighting for the Adelaide Restaurant on the Strand. The plant, erected in the basement of the building which flanks Bull Inn Court. For those who are super-technical, it consisted of a pair of multi-tubular Field boilers supplying steam to two Armington & Sims engines, which drove a pair of 150-light Edison dynamos by means of belts, cogs, levers and pulleys. What!? We know – but it looks nice and it’s a little hidden gem. 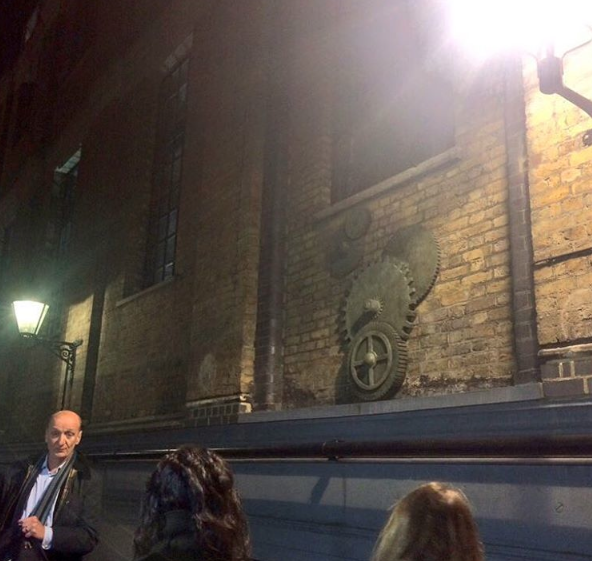 Before we headed up to the more glamorous locations, we need to mention the Fart-Lamp. A named coined by 2LovelyGays’ Russell, the lamp is the last remaining Sewer Gas Destructor Lamp in London. Once upon a time they used to line the Embankment and were powered by the methane in the sewer under the ground. Yes, methane – so basically farts. Topped up by a bit of another kind of natural gas, the lights burned bright for many years but now only one remains and you can find it down Carting Lane if it tickles your fancy!

It was onwards and upwards after that, as we headed to Fitzrovia and we finally caught a glimpse of our first open flame and working gas lamp! Outside an old toothpaste factory on Charlotte Street you’ll see two huge lamps flanking a door. The factory now stands as the Charlotte Street Hotel and they have retained the lamps as a testament to old London – and they look pretty cool. Maintained by the hotel and with their own gas supply, these are a really good place to come to get a little slice of history.

We then strolled around the corner to Heal’s on Tottenham Court Road – or Mecca as we call it – to see the fantastic and atmospheric Cecil Brewer staircase at the back of the store through the lighting department. How apt! A fun fact we found out is that there’s a black cat between the ground and first floor. Legend has it, the cat has been imbued with ‘magical powers’ and you can ask it for wishes or just go get some good luck from it… head to the store to check it out.

If you want to immerse yourself more into the history of lighting, check out Heal’s website for more information about the subject from 1807-2015.

Oh deer 🦌
Ad. Something exciting this way comes 👀 🎥
Ok, the sun is out, we’ve ordered hot cross buns, Easter eggs and wine for the weekend AND it’s a bank holiday. These are all the things Jesus would have wanted 🙌🏼 ⛅️
ad Time to discover your inner artist! 👨🏻‍🎨
Plantmin, a.k.a plant admin 🌱
Normality resumes 🙇🏻
Who knew we’d still be doing lockdown birthdays in 2021? Not Mark anyway but we guess it’s only fair 😂
Is that a little bit of spring we can see? ⛅️
Loading Comments...
Comment
×
<span>%d</span> bloggers like this: